We are a private Personal Protection K9 Training Club. We train for live street and Personal protection and security. We use the NVBK way of raising and strengthening young dogs into powerful adult K9's with solid social temperament. All techniques are the old Belgian ways of training and we work all of the NVBK exercises. Call 386-209-0595 for further info.

An Evolution in Dog Training and Trainer Experience
When I started training K9's in our club in 1977, we started training IPO (Schutzhund). In 1991 French Ring started popping in South Dade County now Miami Dade county. I quickly became interested and started training French Ring Sport. We worked the dogs in my old Kennel in Hialeah Gardens. My first time joining a NARA Club was in 1996 with Tropical Ring Sport Club in Hollywood Florida. The trainer was Mr. Tony Scitarelli. He was my first Ring teacher. I participated in one of his trials. The Judge was Rick Mapels and the decoy was Bill Woody. After that trial. We formed French Ringers Club. The first NARA club ever in West Palm Beach. We celebrated the first French Ring Sport trial ever in the Palm Beaches. In 1998 was our first trial with judge Rick Mapels and in 1999 we had our second NARA trial with French Judge Daniel Bernueil, St Lye, France. We also had huge Seminars before each trial. The Sport of French Ring was brought to the Palm Beaches by us. We also created great interest and many enthusiast. At one time there was two other ring sport clubs that where formed from our efforts by former members that learned the sport of French Ring with us. Also at one time interest grew so much in the state of Florida that NARA had 5 Florida Clubs and a lot of members. There was Ring Fever after our Seminars and trials. 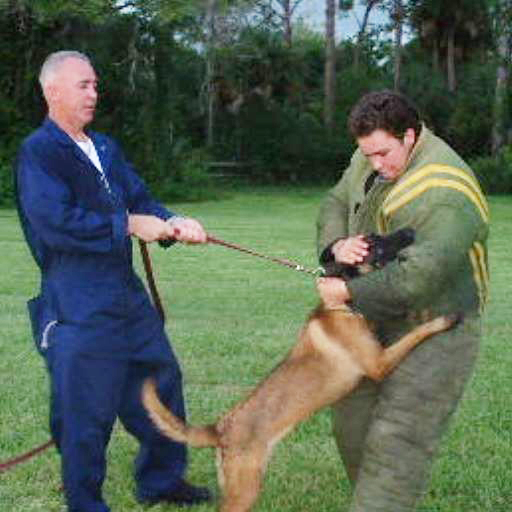 As I had to travel to Europe about 3 to 4 times a year to buy dogs for my K9 Security business. I was constantly looking for the best dogs in Belgium and Holland where I was exposed to the KNPV of the Netherlands and of course the NVBK Belgian Ring Sport Clubs in Northern Belgium. After going to and testing to buy and later to learn the training techniques through mostly all of the clubs. I was shocked at the difference in size and power of these dogs. I quickly realized the huge difference.

I was in the middle of raising my boys and I just got burned out. I stopped competing and resigned from President of the NVBK America. Shortly after the organization was losing control and closed. I had to dedicate my time to raising my sons and paying attention to my growing K9 Business.

We turned our club to a private training club. Till this day we still are a NVBK style training Club. We developed a new training program called "Civil Unrest". This Program is put together with the goal of producing power dogs for personal protection and Police style urban k9 work. Basically our advance program will give you a strong police k9. It's really a combination of my favorite KNPV and NVBK exercises. The ones I feel will make our dogs super personal protection dogs, and also our second level will give you a powerful police k9.