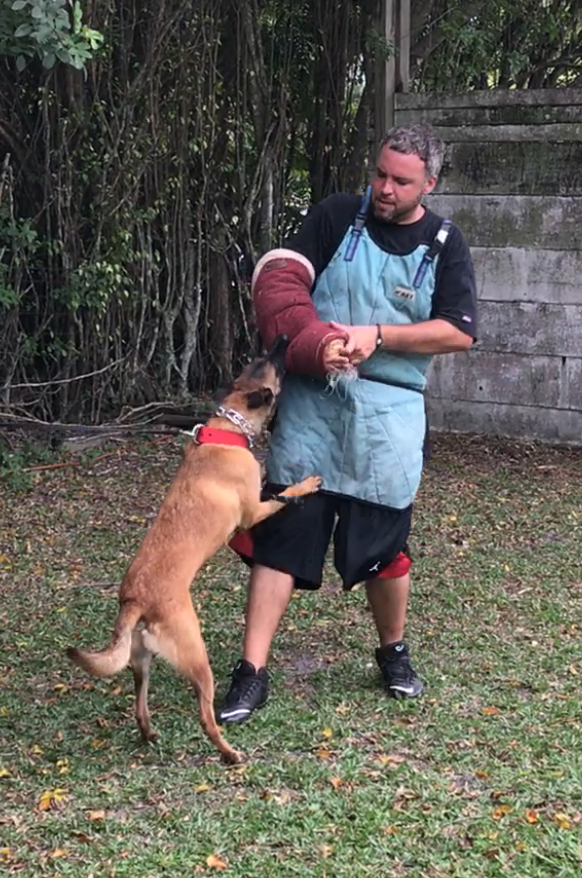 Our style of training is Belgian Ring Sport, known as NVBK. I have traveled and trained dogs in North America, all of Europe, the Caribbean, and Central & South America. In my opinion, many of the best trainers are in Europe. I have trained in Schutzund (IPO), French Ring Sport, KNPV, and Belgian Ring Sport, NVBK. All of these sports have awesome trainers. The reason I chose Belgian Ring Sport NVBK to be my style of training is that over many years of experiencing and seeing different K9 training methods, the Belgian Ring Sport NVBK simply produced the best dogs. The NVBK training programs that I saw with my own eyes, up close and live convinced me. I not only trained in this discipline, but I also decoyed internationally across all of the mentioned styles of training and NVBK turned out superior dogs. The NVBK trainers not only had the biggest Malinois (Mechelaars is the original name), but the also the strongest, fastest, hardest-biting, best agility by far, smartest, and handler hard dogs bar none.

I chose the Belgian Ring Sport NVBK style of training because it was proof to me that it produces the best working dogs out of all the training styles. In all fairness, the only other style that produces power dogs is the Netherlands KNPV. The difference is that NVBK is more difficult and takes longer to train.

I have learned through the years the reasons why. When a trainer starts training, he is inexperienced and looks at Schutzhund and French Ring and how the sport is decoyed. It’s a beautiful style of working a dog. The decoy is running around and moving while he is applying pressure to the dog. Yes, it looks great and it’s a lot of fun to handle, decoy, train, and compete. To the naked eye it looks amazing...the dog must be awesome. Yes, they get trained. They become real good trained dogs. However, it is not the best way to train a dog. It’s a good way to work a dog, but not to train him. There is a huge difference.

Training vs. Working
The difference is training is when you make the dog. When you first teach him. Working him is when he’s been trained and you do additional training or practice what he has learned. This was a distinction that I did not understand in the beginning of my training career. I was fortunate I had a K9 Sales business and had to travel to buy the best stock. It forced me to look at all the different dogs and the sport style they were trained in. That’s what opened my eyes to the facts of the dog business. The biggest, strongest, most powerful results keep pointing at the Belgian’s NVBK. So I had to see this myself.
After my third trip to Belgium and training dogs in multiple NVBK and IPO clubs, watching the trials, crossing the border into the Netherlands and training in the IPO and KNPV clubs in Holland, I was shocked at the difference in the end result. The finished trained dog. There was no comparison, not even close. I knew I was in the big leagues. 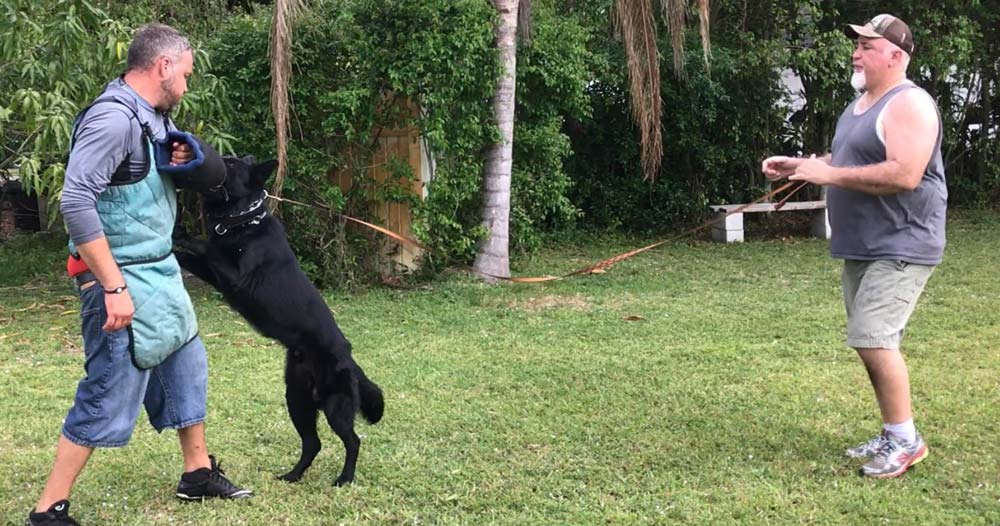 Historical Perspective
It was suddenly clear to me the reason why these dogs were far superior. The experience of the sport of training dogs started in Belgium. French Ring Sport started in Belgium. They stopped doing it because the end result was not what they were looking for. Then they went to St. Hibert Ring Sport. It’s still around, but a faction of hardcore judges and trainers started the NVBK. The major changes were how the dogs were getting decoyed. The obedience and agility styles of training were about the same. They took out all the running around from the decoying of the dogs. They learned that if you run around while the dog is coming to the bite and after he is on the bite, you’re actually helping him. All he has to do is hold on. There is less psychological and physical pressure.

The Difference is in the Decoy

When the decoy is stationary, the dog learns that the decoy is always there for him and he’s not getting esquived and made to miss the bite. So he learns two things:

The dog is forced to bring the fight to the decoy. The decoy is stationary. This is the big difference between NVBK and Schutzhund and French Ring.

The dogs develop their own aggression or what they call in America ‘fight drive.’ They start hitting harder and developing power. Harder bites with intense thrashing on the bite. You only figure this out after 30 years of experience and if you are lucky enough to travel and try all the different dog training sports.

We are a private Personal Protection K9 Training Club. We train for live street and Personal protection and security. We use the NVBK way of raising and strengthening young dogs into powerful adult K9's with solid social temperament. All techniques are the old Belgian ways of training and we work all of the NVBK exercises. Call 386-209-0595 for further info.